Buy 1 MWh of batteries and get 10 of these for free. 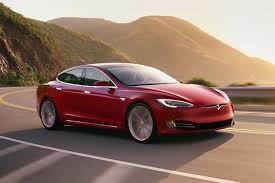 If we can turn 10% of Califonia’s automobiles into EV’s like these, then 100% renewable cities are viable, and the doors for Solar and Wind will open up again.

I am serious about creating a new model that will make the others obsolete.

We are not going to fight the existing realities of all of those agendas, but we can certainly come up with the model that makes those other ones obsolete.  I’ll be intrigued to see how much pushback I get from this.

The renewable energy system is requiring, and justifying grid-scale batteries, from 500KWh to 1000kWh, and these batteries are costing about a million dollars per MWh.

The battery pack size for both the Model X and S Tesla models is about 100kWh. 10 of these vehicles, add up to 1 MWh, will cost less than the stationary battery installation, and provide an added bonus of having pollution free luxury transportation for select employees.  With bidirectional current flow, you have enough storage to participate in the grid stability market. This is a fun concept when you understand potential mutual benefits.  It also takes DER to a whole new level.

Once this starts to roll out, pollution will start dropping rapidly, the semi-mobile DER fleet will be fluid, paying, or being paid for your contribution/via BlockChain can become the norm.  If you have a facility that would benefit and be profitable at 1000 kWh, you could actually save money by hooking up 10 model Xs which would provide the same battery storage equivalent and have 10 pollutions free, luxury vehicles for your employees to use.

Depending on an accurate evaluation of the needs by an independent ASHRA auditor, you could add or subtract the number of Teslas, but it’s cheaper to buy 10 Tesla Model Xs than a 1000 kWh battery that would just sit there.

This could be just a mission to unfold, but it is important to note that many of the worlds largest corporation will suffer revenue shock, as the world switches to infinitely abundant and cheap electricity.

They have successfully maintained barriers, supported and promoted publications that carefully avoid connecting these elements while sounding quite authoritative on the climate improvement landscape.

One of the storage barriers has been the investor-owned utilities desire to own, rate base, and make a return on the million dollar battery. Hard assets owned by IOU’s govern the amount of “cost recovery, plus investment returns” they are entitled to charge their consumers for.

It has taken over a decade for private storage asset owners to be able to buy and sell electricity, for storage, at the same prices the utilities do. Without those regulations in place, electricity storage was simply not financially viable.

In California, this means, that storage can even get paid to take for about a thousand hours per year, and pay less than 2.7 cents, per kilowatt hour 60% of the time. That is less than 10% of the price they would pay if categorized as retail. Electricity which sells in Silicon Valley for more than 27 cents per kWh.

This also explains why I’m screaming that Elon starts focusing on getting the Tesla vehicles built and on the road. The market attractiveness of home with Tesla’s built-in will take care of the rest.

The combination of utilizing more carbon-free electricity, and getting pollution monsters of the roads an ideal scenario.

Save money on electricity storage. Put 10 of these in your garage 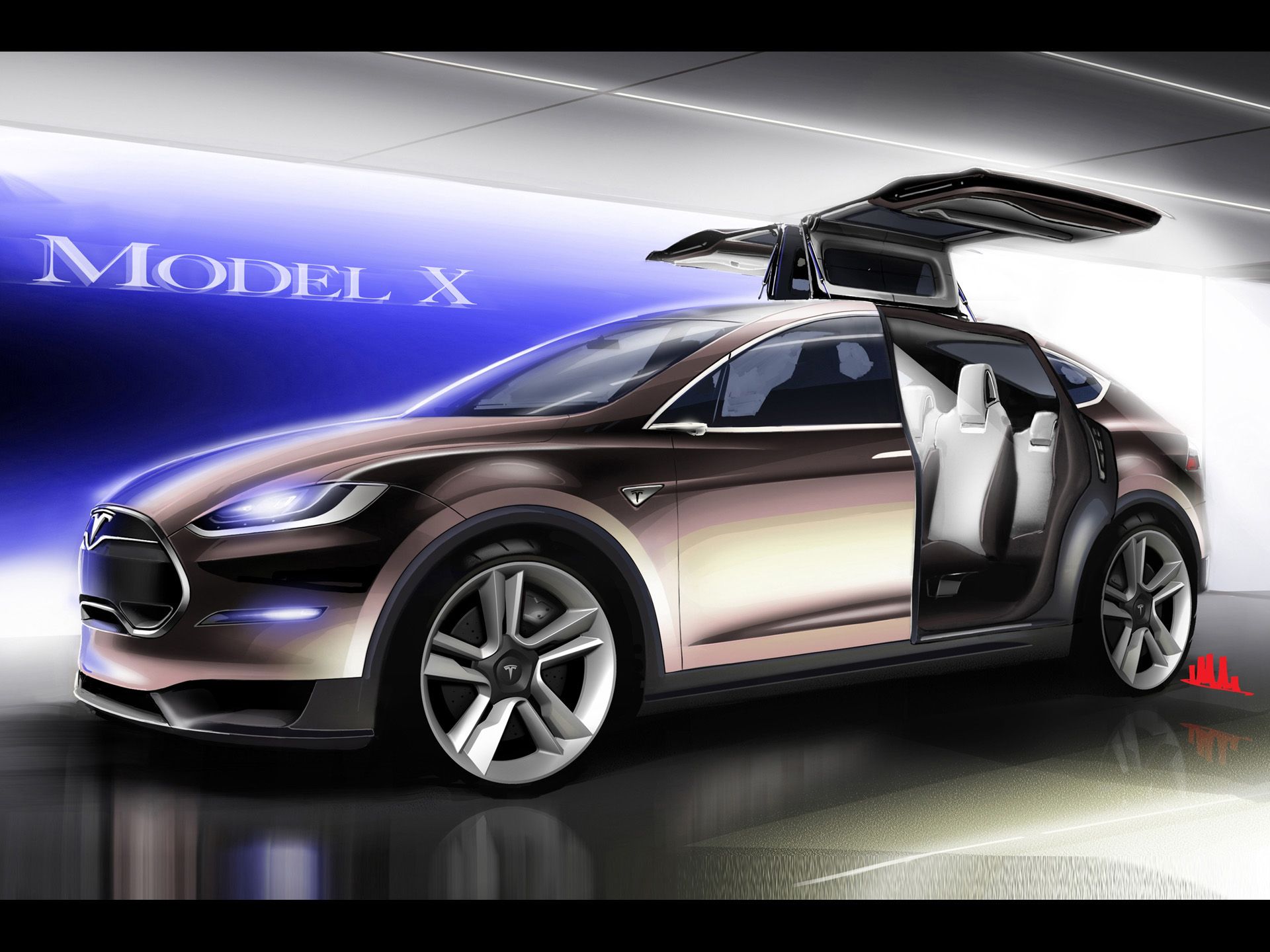 A question from Quora, which is a segue into a more significant and more direct issue.

We are not going to convince 7 of the 10 largest corporations in the world that they need to start reducing the demand for their product.

For the past 15 years, these corporations have been doing everything in their power to keep us focused on coal and renewable energy.

At first, the coal provided a huge target, but then as the same companies have found themselves with a glut of natural gas they’ve changed up their style somewhat, and are continuing two heavily support the ongoing development of renewable electricity generation.

At first, it doesn’t make sense that petroleum would be so in favor of wind generation, but a couple weeks ago I was rereading an authoritative report, authored by a couple of the most respected clean energy advocacies. I was rereading it because, even though I can see ways to use wind power to reduce fossil fuel use in industry, the report just spent four pages of meaningless wording that concluded that renewable electricity just had no place in areas like industrial heat.

The title of this document is Better Energy, Greater Prosperity.  1, and it was sponsored by a consortium called the Energy Transition Commission. (ETC)

Even the lofty Rocky Mountain Institute is promoting this document and the ETC report as the gospel of a cleaner future.     https://youtu.be/e2Uiia5va2I

Enough about “Climate Change?  It’s happening, we have the means to make a radical improvement, w just need to create the will.

“You never change things by fighting the existing reality, To change things,you build a new model that will make the old model obsolete. “ B. Fuller.

Today’s existing energy reality has been created by Shell, and friends, to protect the oil industry from the risk of declining product sales. Shell has a long history of accurate long-term predictions, and I’m sure developed this artful strategy before major wind turbine deployment came on the scene.

I find it interesting that the release and promotion of “An inconvenient truth”   was timed perfectly to promote wind turbine sales. Cabon Advocates were popping up much faster than trees could grow  Energy efficiency retrofits became a huge revenue source for very large and prominent companies who thrived on making promises that could not be kept.

Universities were selling sustainability courses that created certificates with no meaningful skills or value, and completely unimaginable amounts of renewable energy were built, the reliable parts of the electricity grid and fleets were being mothballed and parted out.but the plan worked impeccably, and we now have the byproduct of useless electricity.

Therefore we find ourselves in a situation where we are far short of the political promises, yet the ability to interconnect more wind in random places on the grid is just not there. We are being told that transmission lines will solve the problem, had a chaotic fragmented body of experience and knowledge.

What I find most amazing about our situation is that we have solved the world’s energy problems. The need to burn fossil fuels of any kind is going to start declining, more rapidly than the plans are designed to facilitate.

What my research over the last few months has finally connected the dot on is that the dysfunctional renewable energy generating facilities we are struggling with right now have been in the plan since the beginning.

But there’s more, if you look closely at the LLNL charts the entire, petroleum-fueled side of the global energy infrastructure picture have not suffered at all.

I have not forgotten the free Tesla, but creating this scenario and strategy to make that work is going to take a lot more than one blog post so I have to ask you to trust me is that is the most passionate article I can see myself writing.

What will we use when petroleum runs out?

This question has come up in one form or another a dozen times on Quora lately.

It is clear to me that we are not going to run out of energy, ever, but this specific question about petroleum this caused me to take a different look at the chart that I’ve used many times.

In the past, I’ve used this chart to discuss where our energy comes from, but to address the question about petroleum I am looking at it in the context of how much oil do we use. And for what.

In that context, I’m seeing what is causing the most CO2 and putting far more garbage, and GHGs in the air that generating electricity does.

I am nearly dumbfounded because we have spent so much time talking about electricity over the last decade that conserving petroleum has never been a part of the conversation. Therefore, I would like you to look at this chart from a new perspective, which is how we use energy.

As I took a glance at the user side of the chart, I suddenly realized that we use so much petroleum that the omissions from trucks, cars, railroads, and big industrial plants are more than electricity would be if it were 100% coal.

We use a lot of petroleum, for a lot of things, and virtually every one of them has more emissions than the electricity business does.

What is holding us up is are the biggest corporations in the world trying to figure out how they are going to keep making money as our need for their products continues to decline.

I’m planning to outline some of the strategies that will make that happen as I continue adding to the content for the book.

Why are we worried about energy scarcity?

The question on Quora, this time is: What the world might be like in the future if fossil fuels run out and there is not enough renewable energy to replace them?

We are NOT going to run out of energy. The only limit to renewable energy potential is our ability to integrate it into uses that can capture the intermittent energy, and homogenize it for schedulable use.

It doesn’t matter where the electricity comes from. What matters is how we use it.

For example: How much are these people worried about energy? 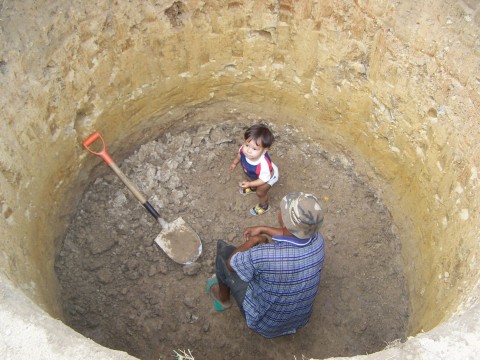 Why has this well dried up?   Electricity!

Here’s how electricity has left these people to starve: In the area where this well is, there was once plenty of water. They only had to dig down 8 feet to find abundant water. The poorest of the poor could still get water with hard work, but they could get water.  Those days are gone. I mean gone.

About a mile from here there are some farmers who use cheap electricity to pump water to irrigate, and grow lots of food for market. When their shallow wells started to go dry all they had to do was dig deeper wells.

They all had enough money to pool that they could bring in machinery that could drill down a hundred feet. They lowered their pumps and were back in business. With cheap electricity, it was no problem to pump every drop they could use.

However, the underground lake, that used to be full almost to the surface of the land, is being drained. Water that once could be reached in 20 feet, is now 90 feet deep. All it meant to the farmers with electric pumps was that they kept having to put longer pipes in the well.

What it means to the farmers in the picture is that they could no longer get even enough water to drink from their well, let alone feed themselves, which turns into a topic about poverty, and sustainability.

How much would it cost to power the entire U-S-with solar panels and battery storage?

One of the flaws in the “renewable energy” narrative is that it only addresses electricity consumption, and electricity is only 19% of the energy the U.S. uses. I don’t know anyone more interested in eliminating “combustion” from our energy mix than I am. But, I’ve also been scorched by “renewable energy” evangelists for pointing out […]

Following the same processes and practices as everyone else is proving to be disastrous. We’re killing the only planet we are genetically engineered to live on. But the “stockholders” have been demanding the continuous growth that mainstream economists seem locked into. Regenerative capitalism will work, but not fast enough to save us. The advertising budget […]